Books I am Enjoying Part 1

At work I have a big pile of 'to be bought' stuff and I think it's time I looked over my collection of books that needs whittling down. You see I have just started adding more to the pile and cartoonists/comic publishers are starting to do those omnibus editions that are really class but take up so much space. I love 'em though!

I just bought the 'Complete K Chronicles' which is by American cartoonist Keith Knight which is brilliant. He created this weekly semi-autobiographical comic strip that has been featured in several publications and online http://www.kchronicles.com/ his home site to name one. I used to check out his stuff every few months online but now I have this massive edition Dark Horse put together that I can take almost everywhere with me. Ryanair flights probably won't let it on as carry-on but I don't care it's friggin' hilarious. 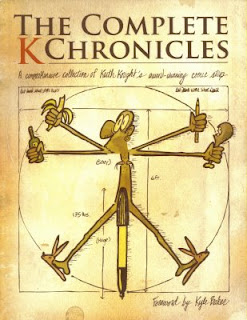 I have a funny feeling I won't be whittling down my book pile anytime soon but I might just add books I like to this every now and again.
Posted by Aidan Courtney at 9:01 PM

Email ThisBlogThis!Share to TwitterShare to FacebookShare to Pinterest
Labels: Books I am enjoying