Been asleep and stuff the past week.  Can't seem to get the energy to do much but for some reason when was dropping off tonight I got the urge to sketch something.  So I got up and started scribbling next thing I know I am drawing two comic book idols of mine from when I was a kid.  Might be nice to ink it later in the week but for now here's as far as I've gotten.  Early start tomorrow and stuff so, um, here's the sketch so far.    Have to say was always a fan of both when I was a kid.  Thanks to Marvel and 2000ad for keeping me entertained for hours as a kid (oh, there are plenty more publishers who entertained me too including a fair few novels). 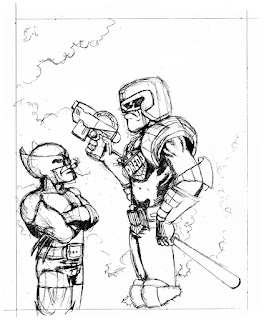 Posted by Aidan Courtney at 4:02 AM

Email ThisBlogThis!Share to TwitterShare to FacebookShare to Pinterest
Labels: Comic stuff, Sketchy Sketchy, Work by me