Now, after months of promising to get this done I am finally up to doing a good job on a caricature for Derek Warfield and The Young Wolfe Tones.  I have been slightly ill the past few months and for reasons I am not going to go into I was not up to (wasn't able) to draw and stuff.  Still ill but am told I'm improving I have me up days and me down days.  Things have improved on the drawing front so have made a bit of a start on the caricature of the band as a whole.  Now this is just at sketchy stages but hopefully by tomorrow I will have inks put down on this baby.  Yay.

Here's how it's going so far: 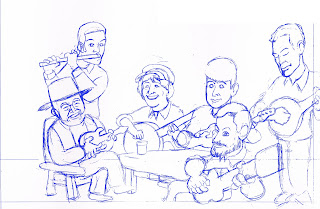 Posted by Aidan Courtney at 2:05 PM