So, I did a bit more inking with the Judge Dredd and Wolverine thingummy I have been messing with the past few days.  It has been fun all the same. 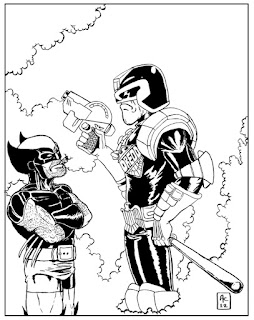 And then I started colouring the thing.  I am not going any further with it (even though this is just a quick colour and I need more practise at it).  I still have to work on on that project for Coimicí Gael and get Issue 4 of Rírá together.  While the past few weeks have been mostly sleeping and trying to get energy levels back up this has been a welcome distraction.  So here's the colour yokeymebob. 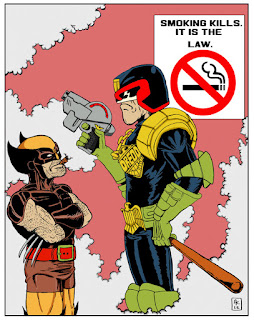 I picked the brown costume for Wolverine because as far as I remember John Byrne and Chris Claremont's Wendigo story was featured in a British X-Men annual way back when I was a kid.  This annual was read back to front and upside down until it fell apart.  Comics were hard to come by ish then in the West of Ireland even though there were some shops that stocked weekly Marvel, DC Thomson, Fleetway as well as other stuff.  So I have always had a grá (love) for the brown cossie.  I didn't do much with the background.  And the sign, well I figured Wolverine wouldn't take nicely to being told to extingush his cigar and Judge Dredd would execute the mandate on the sign to the letter of the law (I hope I phrased that sign right someone is bound to tell me).  Anyway that's that.  As always cheers to Marvel and 2000ad for being two of many that got me started on reading and drawing (sometimes writing).  This is my interpretation of the two big lads.  Good luck.
Posted by Aidan Courtney at 10:23 AM

Email ThisBlogThis!Share to TwitterShare to FacebookShare to Pinterest
Labels: Comic stuff, Sketchy Sketchy, Work by me