So I was scribbling away and was doing Desperate Dan chin.  Next thing you know Bananaman appears in my doodle.  For those that didn't grow up with Bananaman.  He was, for me, one of the funnier things to come out of DC Thomson.  I always loved the style and flair of the art which was by John Geering, who also drew Smudge, Puss n Boots (used to laugh hysterically at them knocking seven bells out of each other) and other stuff.  A sample of his Bananaman is here.  Currently Wayne Thompson draws Bananaman.  His version is here.  What can I say, I love his style.  Love the flair.  Great fun and funny.  He reminds me of a strip I read a few years ago when I could get my hands on it, a French strip called Captain Biceps.  Check this out Captain Biceps.  Funny stuff too.  Anyhoo, I was sketching and whatnot thinking about Bananaman and in no time at all banged this out. 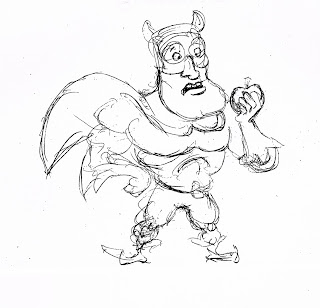 Started with really rough sketch hadn't a clue where it was going. Then: Inked it and stuff. 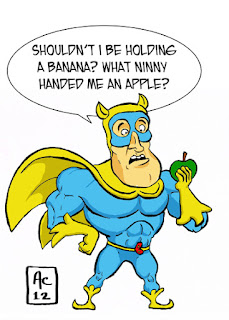 And there we go.  A quick (and frantically quick) colour and there's me attempt at a Bananaman.  Now something to note there's another Bananaman out there.  One that has been around a shorter time than the one I know and love.  This one is based in the States.  While I am curious to read the comic published by Crack Comics I probably won't, as I love the Bananaman I grew up with too much.  I'm sure there are many Bananamen out there.  The banana seems to be the fruit of choice for superheroes.

Posted by Aidan Courtney at 3:22 AM

Email ThisBlogThis!Share to TwitterShare to FacebookShare to Pinterest
Labels: Comic stuff, Work by me