Watched Citizen X there recently with Stephen Rea and Donald Suterland.  Based on the book the Killer Deparment by Robert Cullen it is a slow moving made for TV movie that is actually pretty decent.  It is well worth a look.  Slow burner of a film and as TV movies go it is probably one of the better ones.  As it was made roughly about 1995 it is amazing it hasn't aged that badly.  If you come across it I would have to say it is worth a gander.  Stephen Rea is great in it.  Donald Sutherland is cool.  The Russian accents that seem to be lightly touched on are hardly noticeable after a while.

It is about the investigation of Soviet serial killer Andrei Chikatilo who was convicted of killing 53 women and children between 1978 and 1990 in 1992.  Gripping stuff.  When I saw it first it was on RTE I think back in the early noughties, I suppose I'll call them, an some ungodly hour.  Glad I saw it again.  Really enjoyed it.  There are worse ways to spend a few hours. 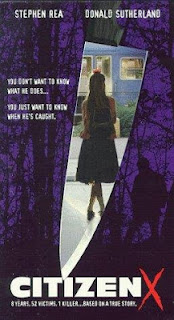 Posted by Aidan Courtney at 7:55 PM

Email ThisBlogThis!Share to TwitterShare to FacebookShare to Pinterest
Labels: Movies, What I watched on Goggle Box